AIN’T I A WOMAN? Sojourner Truth, and the Liberation of America’s Smallest Women

On March 8, 2011, feminists observed the centenary of International Women’s Day—a day when we remember the struggles of women in the fight against gender discrimination, and celebrate the economic, political and social achievements of women past, present and future. 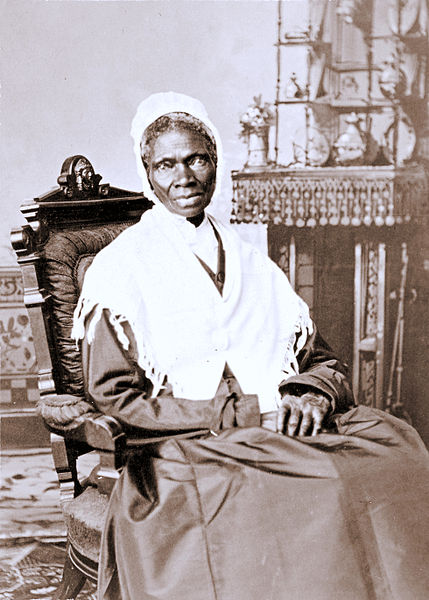 I would like to dedicate this post to the smallest of women:  those who have not yet seen the light of day, but for whom Jesus also died.

These smallest women, still unborn, have been generated in the heart of God, and have been a part of His perfect plan from the moment of creation.

In the early 1960s, when the National Organization of Women was just gathering steam and abortion was still illegal in America, being a feminist was a good thing.

Those were the years when discrimination was real and often severe.  Letter carriers were called “mailmen,” police officers were “policemen,” because those government positions were not available to women.  Employment policies decreed that women could not hold certain management-level positions; that women would train men, who would then become their bosses, but that women could not be considered for advancement; that pregnant women would be required to resign by the seventh month of gestation.  Many women did not drive automobiles.  Few worked outside the home.

But change was coming.  Gloria Steinem, founder of Ms. magazine, popularized the witticism “A woman needs a man like a fish needs a bicycle.”  New York’s Bella Abzug led the way for women into the halls of Congress and co-founded the National Women’s Political Caucus.  “Equal pay for equal work” became the mantra of the1960s gender feminists. Gloria Steinem, Betty Friedan, Eleanor Smeal and other prominent feminists in the ‘60s and early ‘70s decried the fact that a woman was only considered “valuable” to the extent that she was wanted by a man—either her father or her husband.

“No,” the feminists rightly exclaimed, “EVERY woman has an inherent dignity, regardless of her marital status.” The innate value of all women was a battle cry for the women’s movement at its offset.  How ironic, then—how unthinkable—that only a few years later they should abandon that line of reasoning for the convenience of the “women’s rights” movement, hitching their wagon to “a woman’s right to choose.”

For just as a woman is invaluable because she has been created by God, so, too, is the unborn child—the fetus or, before that, the embryo—precious, because God has crafted it in His likeness, has imbued it with life, has granted it a dignity which remains, regardless whether or not it was “chosen” and is desired by its mother.

One of the classic defenses of the value of the human person in America is a speech delivered in 1851 by a former slave, Sojourner Truth.  She was speaking at the Women’s Convention in Akron, Ohio, in 1851, as women were clamoring for equal rights. In honor of Sojourner Truth, and of all persons whom God has created, I reprint her remarks in their entirety.

Well, children, where there is so much racket there must be something out of kilter.  I think that ‘twixt the negroes of the South and the women at the North, all talking about rights, the white men will be in a fix pretty soon.  But what’s all this here talking about?

That man over there says that women need to be helped into carriages, and lifted over ditches, and to have the best place everywhere.  Nobody ever helps me into carriages, or over mud-puddles, or gives me any best place! And ain’t I a woman?

Look at me!  Look at my arm!  I have ploughed and planted, and gathered into barns, and no man could head me!  And ain’t I a woman?

I have borne thirteen children, and seen most sold off into slavery, and when I cried out with my mother’s grief, none but Jesus heard me!  And ain’t I a woman?

Then they talk about this thing in the head; what’s this they call it?

[member of audience whispers, “intellect”] That’s it, honey.  What’s that got to do with women’s rights or negroes’ rights?  If my cup won’t hold but a pint, and yours holds a quart, wouldn’t you be mean not to let me have my little half measure full?

Then that little man in black there, he says women can’t have as much rights as men, ‘cause Christ wasn’t a woman!  Where did your Christ come from?  From God and a woman!  Man had nothing to do with Him.

If the first woman God ever made was strong enough to turn the world upside down all alone, these women together ought to be able to turn it back, and get it right side up again!  And now they is asking to do it, the men better let them.

Obliged to you for hearing me, and now old Sojourner ain’t got nothing more to say.