Lowly shepherds.  Skilled astronomers.  An evil king.  An unaccommodating innkeeper.  A pregnant virgin.  A nurturing foster-father.  A host of heavenly beings.  Some cows, and a baby.

This cast of seemingly unrelated characters is brought together in an unlikely pastiche that has become one of the most familiar stories of all time:  the Christmas story.   And it’s possible–even likely–that you simply accept this improbable story without challenging its veracity.  But stop and think…. Then, pick up a copy of Scott Hahn’s new book, Joy to the World: How Christ’s Coming Changed Everything (and Still Does)

.  Dr. Hahn, with his characteristic thoroughness and clarity, leads the reader through the story, explaining the biblical and historical context, and focuses on the most important part of the story:  the Holy Family.  “The details sometimes seem strange and impenetrable,” Dr. Hahn says,

“…until we consider them in relation to a home, a mother, a father, a bond, a household, a lineage, a heritage.”

That’s how he begins his book:  With a shout-out to the lineage.  “The New Testament begins,” Hahn tells us,

“…not with a discourse or a prophecy, not with theology or law, but with a simple declaration of family relationships.”

Dr. Hahn then explains that Matthew, in writing the Gospel, didn’t simply “settle” for including all the dry details about Jesus’ ancestors.  No, he chose to begin with the most compelling, exciting, and relevant material he had at hand.  For the Jews who were Matthew’s audience, each name in the genealogy would have suggested a dramatic episode in Israel’s history. Salvation arrives for mankind by way of the family–the Holy Family.  Dr. Hahn writes,

“The household of Jesus, Mary and Joseph became a ‘home away from home’ for the eternal Son of God.  It was an outpost of heaven, an image of the Trinity in the world.”

There’s more, of course.  Dr. Hahn explains the role of the others in the drama of the Incarnation:  the angels, with their heraldic ministry; the shepherds, smelling like their sheep; the pure mother Mary; the silent Joseph.  The Magi, with their gifts rich in symbolism.  Elizabeth and Zechariah, relatives of Mary; and Simeon, who prophesied in the Temple about Jesus’ sufferings. Why read this book?  To better understand the feast, so that we can better celebrate the feast–enjoying it for all its infinite worth. 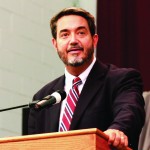 If you are a fan of Scott Hahn’s works, as I am–if he’s helped you to better understand the Mass, the Eucharist, Mary, the saints–you’ll want to take advantage of Dr. Hahn’s masterful research and understanding to learn more about Christmas.  Plan to add Joy to the World to your library now, during this holy season of Advent.