Since he first stepped out onto the balcony at the Apostolic Palace and waved a quiet and simple “Hello!”, Pope Francis has captured the hearts of people from around the world.  Since that time, he’s made us think (and often made us smile) with his twist of a phrase, his witty aphorisms and common-sense logic.

Veteran reporter Andrea Tornielli, Vatican correspondent for the Italian newspaper La Stampa, has gathered up fifty of the popular Pope’s anecdotes in a single volume titled Fioretti – The Little Flowers of Pope Francis: Heartwarming Stories of the Gospel in Action

In the fourteenth century, an anonymous Tuscan author published the Fioretti di San Francesco (Little Flowers of Saint Francis of Assisi), a collection of heartwarming stories from the life of the saint.  Now, Tornielli has followed in his footsteps with the Fioretti

–not of Saint Francis, but of his namesake Pope Francis. 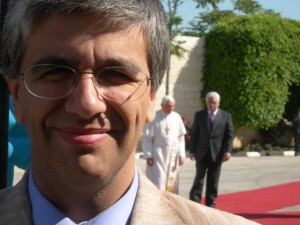 , Tornielli has gathered up heartwarming incidents,excerpts from homilies, testimonies, encounters,  tweets and telephone calls–stories of the gospel in action, grouping Pope Francis’ messages according to topic.  There are “little flowers of mercy” (“the confessional…is not a dry cleaner’s shop”), of frugality (his black shoes with new soles), of everyday holiness  (“my grandmother always used to tell us children: a shroud has no pockets”), of courage, of sharing.

Pope Francis’ devotion to Our Lady is evident in the section on “Marian little flowers” (including Our Lady, Untier of Knots).  “If we are afraid,” he says in a morning meditation at the Domus Sanctae Marthae, “let us remember that our Mother is with us, and like children who are a bit scared, let us go to her.”

I found especially enjoyable the “little flowers with a smile.”  For example, during his visit to the shrine of Our Lady of Aperecida, Pope Francis had to give up his planned “siesta” when, instead, he posed for individual pictures with each of the cloistered nuns in the convent.  The normally silent sisters, he said, “let loose” in the courtyard of the seminary, when they greeted the Pontiff in a downpour.

And remember Pope Francis’ unexpected phone calls to a convent in Italy or a friend in Argentina?  Tiornelli captures them in “little flowers on the telephone.”  “Hello,” he says in one story, “this is Francis.  Tell me about yourself….”

Reading a papal encyclical is a formidable task, requiring a big appetite for theology.  Anyone can enjoy a little snack, though.  A reader can pick up this book to nibble on a little anecdote from Pope Francis at the start of a busy day, or whenever you’ve got a few minutes.drer