“Make Lunch Meaningful”: One Father’s Timeless Gift to His Daughter

Dads with daughters:  Get ready to be inspired.  This is for you. 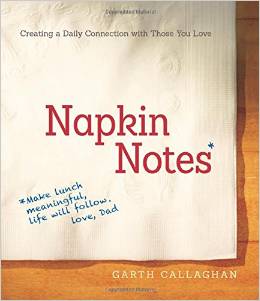 Garth Callaghan began writing “Napkin Notes” for his daughter Emma when she was five years old.  Little one-liners, they offered encouragement, made her smile, made her think, made her know how much she was loved.  The daily notes, tucked into her school lunchbox, included quotes from Mark Twain and Maya Angelou and Erma Bombeck and more.

It became a happy tradition:  Garth turned out a personal note every day.  Emma loved the notes, which helped her to feel her father’s love and learn from his experience, and she collected the poignant sayings in a special notebook.

But then, when Emma was twelve, the family got shattering news that would change their lives:  Garth, who was only 42 years old, was diagnosed with kidney cancer.

I wish I could say that things have changed, that Garth’s tumor is in remission, that he looks forward to writing Napkin Notes for his grandchildren.  In fact, though, Garth’s cancer has advanced; in the last three years, he’s had four recurrences of the cancer that will likely claim his life.  He now has stage four cancer, and doctors tell him he has only an 8% chance of seeing Emma graduate from high school four years from now.

With Garth’s serious illness, the Napkin Notes took on even more significance.  Garth wrote about them:

“I can’t bear the thought of leaving my little girl, of not being there to watch her grow up, to provide counsel and advice, laughs and jokes.  To be her dad.

But I have discovered a way to let her know how loved she is, how much I support her, and how much I care about the person she becomes.  I write her Napkin Notes, which I tuck inside her lunch bag every morning.

This book is a call.  To wake up.  Connect.  Share your feelings.  Make that phone call.  Write that note.  Because I know all too well the fragility of life and how important it is to take the time to connect with those we love while we’re still here, while we still can.”

Even with the severe side effects of his cancer treatment, Garth has committed to write 826 Napkin Notes–enough to last until Emma graduates from high school.  Even if he’s not there to see his beautiful daughter grow to be a woman, Garth’s notes will continue to inspire and encourage her, to enfold her in her father’s love in the years ahead.

“Napkin Notes” is a chronicle of Garth’s love for his family, their shared fight against cancer, his unique journey through fatherhood.  It’s also the story of Garth’s questions:  deep questions that led him away from God, after growing up in an Irish Catholic family and becoming an altar server and a Eucharistic minister, and the answers which led to his eventual reversion to the Catholic faith of his youth.

It’s a heartwarming story that will make you laugh and make you cry.

Garth’s story has touched hearts around the world.  International rights for “Napkin Notes” have been sold in eight countries.  New Line Cinema has purchased the movie rights.